Photographing moving water is a lot of fun, because the look and mood of your shots can be so easily changed by whatever shutter speed you select. 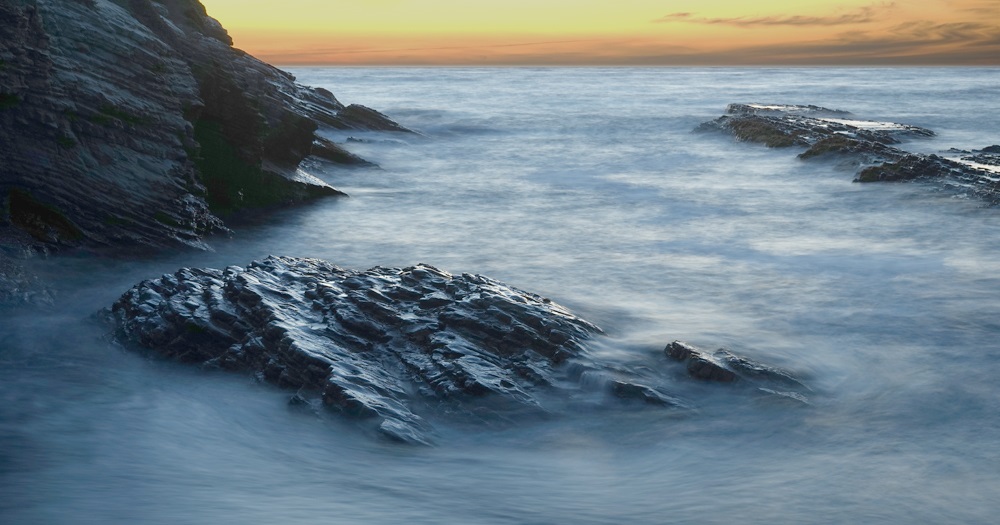 In this shot I wanted to capture the feel of the moving water in a way that matched the quiet of a cloudy northern California sunset. To accomplish this, I needed to use a shutter speed that would be slow enough to blur the water, without being too slow because I also wanted to maintain some of the choppy surface texture of the waves. Shutter speeds that are minutes long can blur water into a smooth and undefined surface. Fast shutter speeds can “freeze” the water, creating a surface that looks still (and boring). Not wanting either extreme in this image, I had to decide: how slow is the right amount of slow?

In order to capture motion blur in water I usually start at a shutter speed of about 1/15 second, gradually trying out slower shutter speeds until I achieve my desired amount of blur. The shot above wound up being a 3 second exposure.

I like to begin by selecting an aperture that gives me a desired depth of field. In this photo I used F11. Next I put my camera into Aperture priority mode, in order to maintain this F-stop. I then set my ISO to 200, and took my first shot, before varying the ISO to see what the image would look like at different shutter speeds, slowing down the shutter speed incrementally from there. By reviewing my images like this I was able to achieve the perfect amount of blur, from which point I just needed to increase the ISO as the sun further set in order to maintain what I found to be an optimal shutter speed (3 seconds of exposure).

What would you do shooting earlier in the day, when it can be very bright outside, creating a situation where your ISO is already set to the lowest setting, but the shutter speed you are using is still too fast? A neutral density filter (ND filter) is perfect for this occasion, by reducing the amount of light exposing the image in your camera, it allows you to use a slower shutter speed. A variable neutral density filter will further allow you to fine tune your shutter speeds.

Always keep in mind that when intentionally blurring water in your image, it is a good idea to always keep something in the frame tack sharp. This enhances the effect, while also making clear to your viewer that the effect was intentional. To keep the rocks tack sharp and my kit steady, I used a tripod and, of course, my Acratech GP Ballhead.